skip to main | skip to sidebar

High Speed Dirt is strong at the plate, but may need some help on the mound.

1. You really have to start working on your Christmas cards in July to get them out on time. Ours are coming...but they might arrive as Valentine's Day greetings.

2. Part of being an adult means accepting that a few of your dearest friends will move away. We miss you O'Deas and Parsons...we still miss you Ross'. 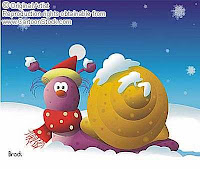 3. Santa Claus sure seems to freak out a lot of kids. Maybe it's time to elect a new mascot. I'm voting for the Christmas snail. He's tardy by nature so it's okay if all your gifts aren't purchased by the 25th or if your cards don't go out until March.

4. There are going to be some people who, for no reason, just aren't going to like you - and that's okay. 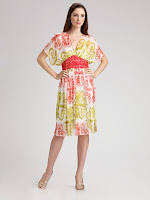 5. Fashion trends and economic trends are polar opposites. Bad economy = luxury fashion. If this rule remains for spring things are looking up (despite what all those professional news people are saying on TV). Styles are a little more bohemian, minimalist and "green." So help boost our economy and invest now! (Side note: Although I'm very confident in my statements you should really consult your financial advisor before acting on my advice, as my degree is in apparel merchandising/design and I have no business telling people how to invest their money. But I'm pretty sure I'm right.)

6. Your metabolism can start to slow and wrinkles start to form as early as your 28th year. It just gets harder and more expensive from here.

7. The key to dressing well every day lies in that third piece. For more information invite me into your closet for a personal wardrobe consultation.

8. It's a lot more fun staying in and watching a movie with your husband and two pups than it is to go out on the town. But the occasional night out is important to keep in your routine just to mix things up.

9. As much as I'd try to deny it, I'm a little bit competitive. And that's not necessarily a bad thing - as we pat ourselves on the back for our second place door decoration win in the Albany Historic District Christmas Tour. (The win and credit really go to Marianna O'Dea who designed our door. Thanks Marianna! Same time next year? We're going for numero uno in 2009!)

10. No one ever really talks about vanilla. If you want to be interesting while you're here and remembered when you're gone you have to be a little quirky, a little eccentric and a little different.


11. If no one is talking about you, critiquing you, or challenging you then you're not making a difference.
Posted by Carriage House at 4:17 PM 5 comments:

We'll return to the blogging world after the holidays. Barbie said "math is hard." While I agree, what's harder is finding time to get everything done. And we don't even have kids yet. Merry Christmas and Happy New Year!

A Clutch is Worth a Thousand “Wows”

I am a firm believer that the key to dressing chic every day lies in a single piece that pulls an outfit together and finishes it. This piece is the “wow” factor and it is the reason two women wearing very similar clothes can look completely different – one far better than the other. Be it a belt, shoe, scarf, necklace or handbag, the “wow” piece takes an ordinary outfit to a whole new level.

This season a “wow” piece you must have in your possession is a clutch handbag.

Forget what you ever thought you knew about clutches – especially if you thought they were evening appropriate only. This season clutches are not only daytime ready, but are delicately tailored, intricately detailed and lavishly adorned. They almost resemble pieces of jewelry…except these bobbles store your lipstick, cell phone and credit card and are perfect companions to the grocery store.

Two designers have outshined the rest and mastered the art of concocting the perfect any time clutch – Rebecca Norman and Lauren Merkin.

Kate
Posted by Carriage House at 10:31 PM No comments:

I am officially suing whitepages.com

I used to love, adore whitepages.com. It was my first stop when I needed an address or phone number. I even recommended the website to friends and family and touted how much easier than an actual phonebook it was to navigate.

I was doing the norm, looking up a few addresses, etc. when I realized how fancy the website had gotten. It now informs you whether the address and phone number listed is the person's work or home number and who else might be residing at their same address. It also lists where else he or she may have lived in previous years, and allows you to purchase (for a small fortune) a brief history of anyone with a social security number.

So I did it. I "whitepaged" myself. At first everything seemed fine. It showed I had a previous address in Collierville, TN (Memphis) and one in Decatur. I trusted their free information was correct and opted not to fork over the $54.99 to be sure.

Now, I don't know if this is some kind of sick joke set into motion by a person from my past who works for their company and has it out for me or if it is a legitimate mistake, but no one ages me that many years and screws me out of that many birthday gifts at the same time. Whitepages.com, either fix your misprint by 0400 hours on Thursday or I'm suing your inaccurate booty for defamation of character. In fact, as many people as you have listed on your website I bet we could get a little class action business going.

(ATTENTION READERS: If you have been defamed by whitepages.com please contact us immediately.)

I am serious. This is not a joke. Fix the lies you have listed on your website.

In separate but related news...Today's Lesson: pretty much everything you read on the Internet is false.
Posted by Carriage House at 2:42 AM 1 comment:

Living in the deep south means that after God and family only one thing reigns supreme - college football. Now I just checked my own personal list for verification, and just as I suspected there are quite a few things that rank higher than football in importance. But to avoid excommunication I go through the motions and cheer when everyone cheers, dress my pets in Auburn gear on game days, and agree that the Tigers must stretch the field vertically with its outside receivers to open up the underneath routes, the screens and the running game...whatever that means.

I have grown to enjoy some parts of this Saturday ritual, but even after drinking the Kool-Aid for many (many) years Auburn football still doesn't trump a proper fashion show swag bag in my mind. But marriage teaches you things. Just as Carl has learned the importance of Vogue's September issue, I've learned that Auburn in HD fails in comparison to seeing them in the flesh. And so follows a few other things I've learned in the almost two years of marriage to a footballer.

1. Ask before you invite. Although we females enjoy viewing our favorite sporting events (Oscars, Emmys, MTV Music Awards) surrounded by hundreds of our closest friends, oddly, males don't necessarily want to share the big game with them. Some prefer to experience game day solo - so they can blurt expletives and throw chicken wings at their flat panel without judgement.

2. As a person with an appreciation of aesthetics I naturally have a love for fashion. Carl calls it an obsession, whatever, pre-med/pre-law. Anyway, I've learned that kick-off isn't the time to ask your husband's thoughts on 3/4 vs. opera-length gloves. The only thing you will successfully accomplish is raising his blood pressure.

3. Your husband doesn't care (especially during an extra point kick) that the "HeatGear" technology in the team's uniforms, designed to keep players cool and dry in extreme heat, is similar to the moisture-wicking fabric found in a brand of pajamas for menopausal women.

4. If you walk softly and carry a case of your husband's favorite beer he'll be much more inclined to hand over his credit card, sign off on Botox or agree to give you half of his already minuscule closet space.

5. Football season is the best time of year to recover your dining room chairs, purchase new draperies or paint the entire exterior of your home (just don't touch the room that houses your hubby's favorite TV). Your beloved will be so wrapped up with game day he won't even notice the changes until well into February and by then you will have them paid off.

6. It's considered in poor taste, unAmerican even, to suggest your spouse sell his AU/LSU tickets for a hefty profit so you can buy fabric for new throw pillows for your living room sofa.

7. If there is ever an overtime situation it's best to avoid conversations that begin with: "What do you want (insert dog's name here) to be for Halloween?"

With the better part of a football season ahead of us I'm sure there is lots more to learn. Stay tuned...

A first and a few other things 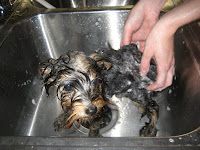 Bogey recently experienced a first in his short puppy life – bath time. We, like the good parents that we are, captured it on digital camera so we could share this special moment with the world. He was just as scared to death in real life as he looks in the photos.

Please note that this particular bath actually occurred weeks ago so don’t call social services just yet. He’s had several baths since; it has just taken us a while to post pictures. We don’t want anyone thinking we’ve waited this long to bathe the poor guy. What kind of parents do you think we are?!? 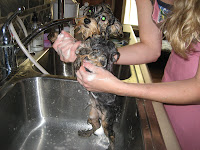 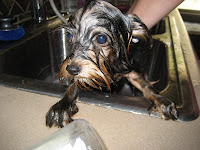 We also wanted to share a few photos of Bogey’s latest sleeping position and beautiful new bed. We call it the Spread Eagle Royale. Clearly, he finds his new digs comfy. 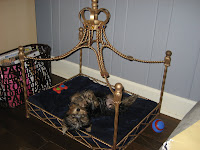 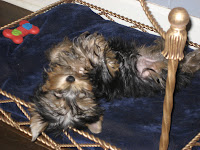 Question: When is it appropriate to decorate your pets (and house) for Halloween? Please advise. Bogey really likes sporting his “Trick or Treat” bandanna so we hope we aren’t breaking protocol. I also fished out my “If the broom fits…ride it” tea towel but I don’t think it is Halloween specific.

Posted by Carriage House at 7:15 PM No comments: 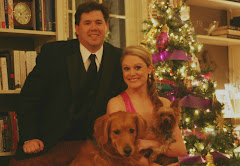 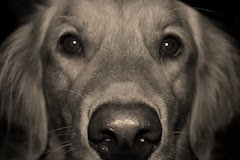 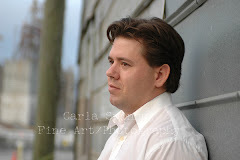 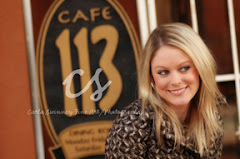 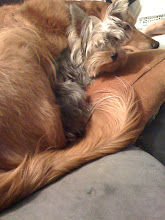 A Few of our Favorite Sites